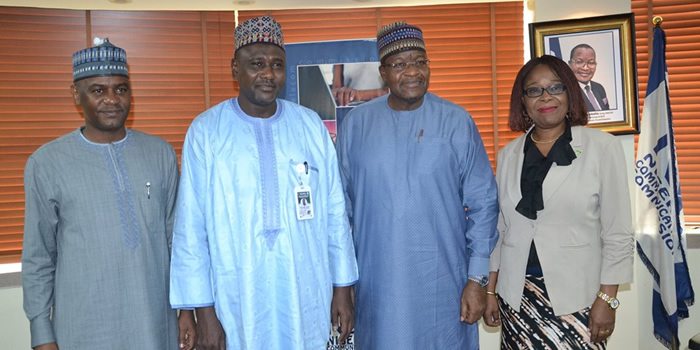 The Director General of the National Environmental Standards and Regulations Enforcement Agency, NESREA, Prof Aliyu Jauro says Nigeria is the first African country to move towards the Circular Economy model.

Prof Jauro who spoke during a courtesy call on the Executive Vice Chairman of the Nigerian Communications Commission, NCC, Prof. Umar Danbatta also said the efforts of the Agency in promoting this model was already attracting a lot of support both locally and internationally, including a recent grant from the Global Environmental Facility, GEF.

The visit was to enable both organizations strengthen the existing relationship and rub minds on some areas of interest particularly in E-waste control and environmentally sound Telecommunication Operations.

NESREA DG described as worrisome the existence of a parallel regulation on E-waste control by the NCC pointing out that the National Environmental (Electrical / Electronics Sector) Regulations, S.I. 23, 2011 developed by NESREA has since been in force as a tool to control E-waste in the country, adding that Nigeria was the first country in Africa to have such regulation.

He said, “The Extended Producer Responsibility (EPR) being a major provision of the Regulation is the bedrock of the plan towards establishing a circular economy model in the country.” This fact Prof Jauro added was well acknowledged by the then Honourable Minister of Environment, Surv. Suleiman Zarma at the 12th edition of the Annual Stakeholders’ Forum organized by the Agency.

In his response, the Executive Vice Chairman of the NCC, Prof Umar Danbatta affirmed the preparedness of NCC to collaborate with NESREA. He promised that the areas of conflict would be effectively addressed.

An Inter-Agency Committee is to be setup, headed by the Director Inspection and Enforcement, Mrs. Miranda Amachree to  look into the grey areas with a view to proffering solutions.