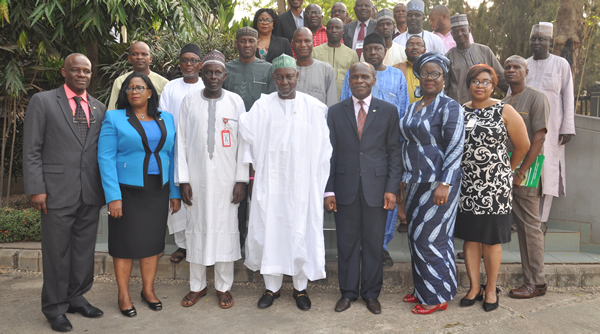 The new Minister of Environment, Surveyor Suleiman Hassan Zarma, paid a working visit to the headquarters of the National Environmental Standards and Regulations Enforcement Agency, (NESREA) in Abuja on Monday 4th February 2019.

The Minister was accompanied by some Directors of the Ministry and was received by the Director General of NESREA, Dr Lawrence Anukam, Directors and staff of the Agency.

During the visit, Surv. Zarma promised that the Ministry would provide the necessary support to NESREA to achieve its mandate. “As a Ministry, we would be able to give you the backing you require as an enforcer of regulations”, he said.

The Minister enjoined NESREA to continue with its enforcement activities saying, “You are not expected to get claps or accolades from industry. What I want you and your team to do is to enforce these laws no matter whose ox is gored. No regulator is a favourite of a person who is operating in contravention of our laws”.

Earlier, the Director General had told the Minister that the Agency has successfully developed and gazetted 33 environmental regulations since inception and that the regulations address specific environmental problems in various sectors of the economy.

He further briefed the Minister on the Extended Producer Responsibility (EPR) Programme of the Agency, describing it as a framework of action for a collaborative and partnership approach between government, business and the larger society towards achieving a zero waste society in the future, and creating wealth from waste.

On the National Vehicular Emission Control and National Generator Emission Control Programmes, the Director General disclosed that both programmes were intended to address the problem of air pollution in the country and that arrangements are being finalized for the formal take off of  programmes.

He said the Agency was regulating the telecoms sector through comprehensive national environmental audit of all Base Transceiver Stations (BTS) nationwide, and has also effectively curbed environmental degradation by quarry operators.

Dr Anukam also listed some of the achievements of the NESREA to include “controlling of illegal trade in endangered species of flora and fauna, effective collaboration and partnership with relevant MDAs in the Agency’s enforcement programmes.