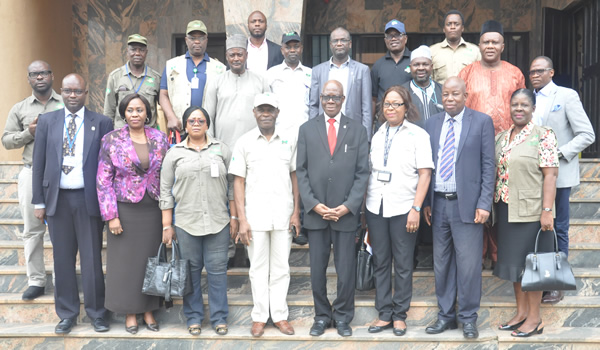 The decision to collaborate was made on Thursday at the headquarters of the Nigerian Nuclear Regulatory Authority during a courtesy call by the NESREA management team led by the Director General, Dr. Lawrence Anukam.

Dr Anukam spoke about the impressive achievements of the agency particularly the production of 34 new regulations to monitor the environment, the establishment of 24 state field offices and the creation of six zonal headquarters.

He disclosed that the agency as a parastatal of the Federal Ministry of Environment was set up by an Act (2007) to halt or stop any process that will undermine the environment.

Dr. Anukam further explained that as part of the NESREA Act, the Agency is responsible for enforcing compliance with provisions of international agreements, protocols, conventions and treaties to which Nigeria is a signatory. “This is why it is necessary to have cooperation with NNRA since they also have to do with the environment,” he stated.

He went on to give a rundown of the Chernobyl disaster which had an adverse impact on the environment and affected many lives. “So we need to guard against those things by collaboration and information exchange,” he added.

Responding, Processor Lawrence Anikwe, the Director General of NNRA, who was very delighted at the prospects of mutual cooperation welcomed the idea pointing out that this was the right step to take.

Professor Anikwe admitted that the task of policing the environment would be more successful and effective with the collaboration in place.

According to him, “other benefits such as capacity building, training of personnel, comparing notes would make the job a lot easier,” he said.