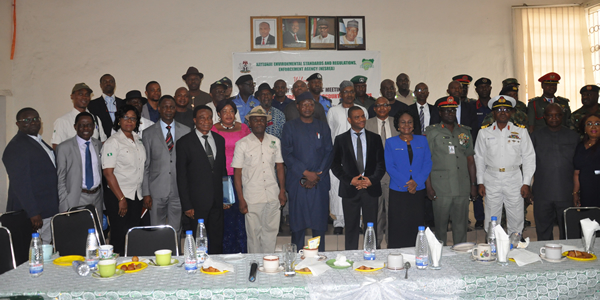 The final quest for a lasting solution to the pervasive air pollution problem in Port Harcourt and environs has begun. The problem has been a source of worry to residents and has raised serious social, economic, health and environmental concern.  The Federal Government took that concrete step last week by convening a one-day stakeholder meeting in Port Harcourt, the Rivers State capital.

The meeting took place on Thursday 26th of April, 2018 at the South-South Zonal Headquarters of the National Environmental Standards and Regulations Enforcement Agency (NESREA).

The meeting was organized by NESREA. Speaking during his welcome address, the Director-General/CEO NESREA, Dr. Lawrence Chidi Anukam thanked the participants for honouring the invitation and stated that their presence at the meeting was a clear demonstration of their commitment to finding a lasting solution to the pollution episodes in Port Harcourt and environs.

He informed that the meeting was carefully structured to elicit concrete recommendations with forward-looking programmes and activities that would address the problem.

Dr. Anukam explained that in the course of proceedings, only one technical background paper would be presented to guide and provoke discussions focusing on key issues.

The Director-General assured the participants that NESREA will continue to collaborate and partner with key stakeholders at the federal and State levels, in the quest to solve the air pollution problem in Port Harcourt and environs.

In his opening remarks, the Honorable Minister of State for Environment, Malam Ibrahim Jibril Usman, who was visibly worried by the reoccurrence of the problem, declared: “this is a good opportunity for us to deliberate collectively and find a lasting solution to this issue.”

He stated that the meeting was a clear evidence of the commitment of the Federal Government and its capability to discharge its duties and functions towards protecting lives and properties of the people in Port Harcourt and its environs.

Acknowledging the growing cases of respiratory disease, eye problems and other ailments associated with air pollution, the Minister informed participants that the outcome of the meeting would greatly assist the Federal Government in charting a new course to bring a lasting solution to this menace.

Malam Jibril spoke about the deep concern the Federal Government felt over the growing incidence of soot pollution of the air in Port Harcourt and its environs and the complaints associated with its settling on rooftops, floors, offices, and vehicles.

He reminded the audience that though the Federal Government was aware of its responsibility to protect the environment and human health, improving air quality in Nigeria should be a collective responsibility for all.

The Minister disclosed further that although several consultative meetings and awareness creation activities had been carried out in the past, involving some key stakeholders in the public and private sector at the Federal and State levels, there was an urgent need to further intensify actions to address this problem.  “This is precisely why we have gathered here today”, he stated.

For their role in the past, the Honorable Minister, while acknowledging the efforts of the Rivers State Government, the Federal Ministry of Environment and its Agencies – NESREA and NOSDRA, urged the residents to remain calm and take adequate protective measures. He advised them to remain vigilant at all times and report any observed illegal acts that may adversely affect the air quality to the appropriate authority.

He informed participants at the meeting that the objective of the gathering was to provide a platform for public discourse, to identify key sector players and their specific roles and responsibilities in order to address the problem and to proffer concrete recommendation on the short, medium and long-term measures to halt the growing menace.

The Minister warned that the air pollution in Port Harcourt and its environs if not curtailed could have serious direct and indirect implications on other parts of Nigeria.  “We have come here to act now. The outcome of this meeting will not only assist to address the problem in  Port Harcourt and its environs but also other parts of the country”, he stated.

The former Director of Center for Petroleum Geosciences, University of Port Harcourt, Dr. Francis T. Beka had in his key background paper presentation elaborated on a number of possible factors that may have been responsible for the air pollution problem explaining that with the implementation of environmental best practices there would be better air quality.