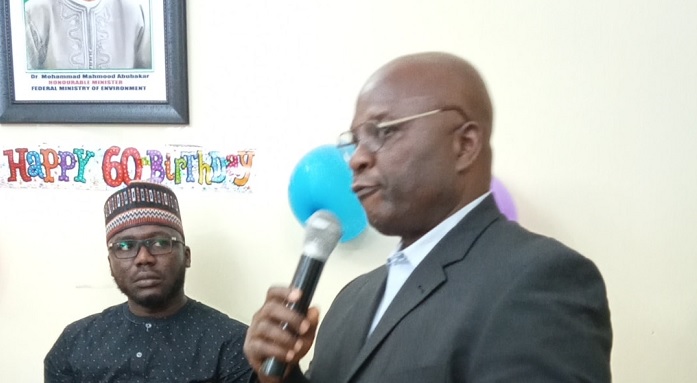 It was a day already known and prepared for, but when it finally dawned it came with mixed emotions for the management and staff of the National Environmental Standards and Regulations Enforcement Agency, NESREA. It was the 31st day of August 2020 and marked the last day in office for the Deputy Director, Press and Protocol, Mr. Sule Oyofo, who attained the mandatory retirement age of sixty. It was a praise galore at a 60th birthday cum retirement party organised for him by the Press and Protocol Unit. The Director General, Professor Aliyu Jauro described Mr. Oyofo as a very hardworking and humble gentleman with an unstained record of service.

Describing it as a great privilege for one to retire in good health, Prof Jauro expressed the belief that even while in retirement, the untiring Mr. Oyofo will record greater achievements. Other management and staff at the event were full of commendation for a man whose convivial nature drew many to him. Mr. Oyofo attended the   University of Lagos where he bagged a Bachelor of Science Degree in Mass Communication in 1984. From the year 1999 to 2000, he attended the CETEP, Yaba Lagos, an Affliate of Ogun State University, Ago-Iwoye, where he obtained an MBA in Information Technology.

He started off his journalism career at the Daily Times Newspaper  as a staff writer and rose to the position of Assistant Features Editor. From Daily Times, he became the Managing Director of Soft Consult Ltd, a firm of Public Relations and Advertising Practitioners based in Lagos. From 1996 to 2002, he was the General Manager of Rosscambell Nigeria Ltd (an affiliate of Gamel Nasser Company of Egypt) In June 2003, he was appointed the Special Assistant to the Chief Whip of the National Assembly, Federal Republic of Nigeria.

In September 2004, he became the Special Assistant to the Chairman, Senate Committee on Environment and Ecology, and he held that position until 2007 when he joined the National Environmental Standards and Regulations Enforcement Agency, NESREA as Deputy Head of Press. He rose to the position of Deputy Director Press and Protocol in 2014. In NESREA, he served under three Director Generals , first the Pioneer DG, Dr. Mrs. Ngeri Benebo; her successor, Dr. Lawrence Anukam and until his retirement, Prof. Aliyu Jauro.